Discuss your project
Stable growth is the reliability sign. Cinimex company sums up the year results 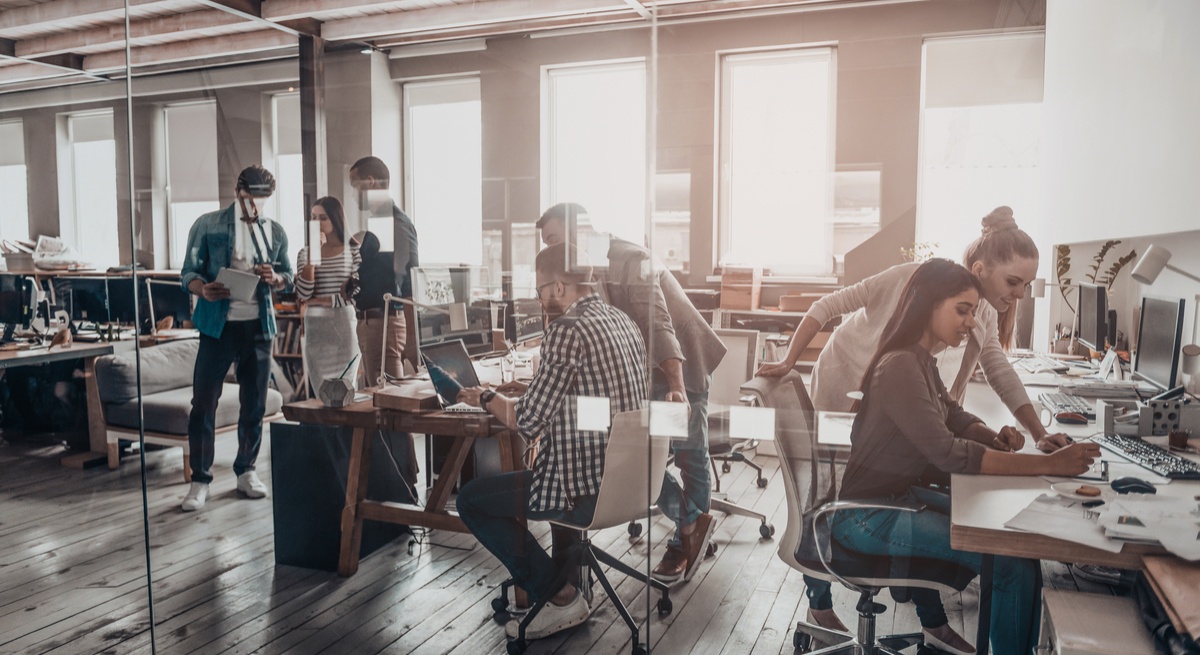 The Russian developer and system integrator of software solutions for the financial sector and other industries has shown steady growth over the past few years.

A new functional unit within company appeared past year: Cinimex Data Lab. Its main aim is to apply machine-learning technologies to customer projects (including foreign ones).

IT Prize awarded by the TAdviser confirmed the success of Cinimex joint projects with Alfa-Bank. In December company received recognition in the nomination “New technologies in banks: IT project of the year”. Cinimex developed a resource, allowing Alfa Travel's loyalty program partners use open APIs. Company specialists ensured the open APIs availability: implemented the interfaces on the Open API, as well as the components that connect the Open API with the bank's processing systems. The goal was to provide customers with a travel booking services with the possibility of paying loyalty points with an Alfa Travel card. The solution is implemented on the IBM API Connect platform. Along with this, Alfa-Bank and Cinimex launched the bank card instant issuance service. The technology allows bank customers to order a credit or debit card with a few clicks and start using it. Alfa-Bank was the first in the Russian market to offer its customers such an opportunity. Within the framework of the project Cinimex developed the integration bus to combine all the upgraded systems and modules involved in the service implementation.

The IBM Integration Bus software (serves as the platform for the service integration bus) meets all the requirements for scalability and software business continuity in the bank's IT landscape. More than 20% of all ordered Alfa-Bank cards are now issued in just a few seconds.

The Cinemex specialists participated in the maintenance and development of the main integration platform in Gazprombank - the Interaction Management System (IMS), the Enterprise Resource Planning System (ERP 1C), the Inventory Accounting System based on the 1C software (IAS). As a part of ERP 1C and IAS projects development an electronic document flow with EDM operator has been implemented regarding the invoices exchange and source accounting documents with the Bank’s counterparties.

Cinimex implemented several large projects for the Russian Agricultural Bank in 2018: company ensured seamless transition to a new core banking system without related systems significant increment together with the parallel implementation of a new modernized integration platform (MIP) of the Bank. Previously, the bank's IT systems interacted through a platform based on IBM WebSphere ESB. Today, the infrastructure is in the transition process into new modern software: IBM Integration Bus.

As for the MIP the work of Cinimex project team was focused on the message routine system (including the New Integration Bus (NIB) on IIB and the formation of routing control center based on DataPower Gateway); workstation with a centralized configuration management system; NIB local router; technological multiple device adapters; extended logging and alerts systems. Implemented solutions are based on IBM IIB, MQ, WAS, Data Power Gateway products.

In 2018 Cinimex also developed large-scale projects at VTB Bank. For example, company participated in the development of a new remote banking system for VTB corporate clients – RBS 2.1, as well as P.R.I.S.M systems for information exchange with Bank of Russia.

Cinimex company carried out a large-scale project at Raiffeisenbank due to innovations introduced by Regulator. Two years ago, banks were notified of the need to transfer on a new version of an automated electronic document exchange system.

According to Bank of Russia Inter-regional Center of Information Processing letter, the system should provide messages signing by encryption and authentication in the format and protocols that meet the Bank of Russia requirements. Raiffeisenbank proceeded with the transfer of the electronic messages signing from the Bank of Russia Client’s automated workstation (CAW) to the Automated Client Systems (ACS) in November 2017. At the same time Cinimex team launched the project. Solution includes two main parts: module of validation/ signing of messages on three possible UFEBS protecting options and managing and operation controlling CAW of this module. The solution implemented on the .Net platform with sufficient performance for signing both individual messages and packages. CAW is developed on Angular 5+ Spring as a branded web application. With the built-in role model it can control the working modules configuration, monitor the input and output streams status, record the errors facts and display the relevant information to the administrator in real time mode.

Since 2019, February 28, Faster Payments System (FPS) has been fully operational in 12 financial organizations, including Raiffeisenbank. FPS enables individuals to make instant transfers in real time using simple identifiers (for example, a mobile phone number) regardless of in which banks sender and recipient have their accounts. The Cinimex company has developed a REST-interface in record time (1 month) – to provide convenient access to the highly specialized software functionality: Means of cryptographic information protection “Yantar 5”. According to the Bank of Russia Regulations “on the requirements for information security in payment systems Bank of Russia” and to ensure information exchange security in FPS at Raiffeisenbank all messages are encrypted between Operational and Payment Clearing Center (OPCC) and FPS participants. In addition, electronic signatures (ES) of all incoming payment messages are checked and ES are provided for outgoing messages.

Last year Cinimex continued cooperation with one of its regular customers – Post Bank. The Customer Integration platform experiences perhaps the heaviest load in the Russian banking sector - about 7-8 million transactions per hour. In addition the Customers business scale is constantly growing. In 2018 Cinimex continued to develop and improve Bank’s infrastructure by using IBM products. The cooperation has allowed for the first time in Russia to build a strong infrastructure based on IBM Integration Bus and Data Power products. Stable work and the absence of serious incidents are evidence of this. Due to continuous integration, the Bank manages to keep up the time-to-market indicators.

System for storing information on subjects monitoring (SENQL) was developed for United Credit Bureau (UCB) by Cinimex and now is at the stage of design acceptance test. The system is designed to automate the loading, storage and processing of the data from the Sources in the Bureau, as well as to organize data exchange with the Bureau’s main database (DB) and monitoring systems. The project was developed in accordance with the requirements of the latest edition of the Federal Law “On Credit Histories”. In addition, the team was able to speed up the data update in the Bureau main database.

Cinimex completed another project at UCB last year. Analytical platform which provides credit scoring of individuals based on credit histories and alternative data sources was developed in 2017 and launched at 2018.

The service allows UCB clients (banks) to assess the individual creditworthiness by points, receiving data from a single source without the need to buy and integrate different databases.

Unlike many large customers, VOLKSWAGEN Group Rus is ready to experiment with OpenSource technologies and actively implementing it.

In 2018, Cinimex specialists automated the opening accounts process for legal entities in Rosbank. Until June 2017 this process was implemented in three different systems that made the control process difficult, the reduction of time costs impossible and often led to errors in processing applications.

Users were transferred from using several systems to working in “single window” system; transparent statistics on the application procedures and departments work became available in online mode at the bank head office; and the foundation was laid for further process optimization.

The new functionality was developed on IBM Digital Business Automation. The front part is written in Angular 5+. In addition, the project implemented a large Java framework that provides RestAPI for both BPM itself and third-party systems.

A customized solution based on 1C: ERP 2 was implemented in the Russian division of Bang & Bonsomer, an international company. The system is in pilot operation from January 1, 2019, and after the end of the first quarter of 2019 (and after its successful closure) it will be transferred to commercial operation. The system provides enterprise comprehensive accounting, covers all accounting area: from sales and procurement planning to reporting under the standards of RAS and IFRS.

Historical data has been transferred to the system; integration with many other holding systems has been implemented. It is planned to replicate the solution to the company's divisions in some CIS countries.

The customer portfolio was also replenished with two foreign companies due to the active work of the new division - Cinimex Data Lab. One of the implemented projects is a credit-scoring algorithm that determines client’s disposition to default in the European microfinance organization “Beatha Technology”. It took the team about 4 months to develop a data analyses platform on OpenSource technologies, in particular: Python, PostgreSQL. As a result, the specialists developed a scoring system and placed it into the existing loan issuance process.

Cinimex Data Lab specialists developed an algorithmic marketing platform for mobile games with dynamic pricing and user retention functions for Norah Analytics, company whose offices are located throughout the world: from the UK to Singapore. The system processes big data and has the ability to quickly connect new customers. Developers quickly implemented libraries composition and a platform that allows full circle of predictive models development.

“The development course chosen last year and focused on the growth of not only quantitative but also qualitative indicators, has justified itself,”- commented CEO of Cinimex Andrey Sykulev at the end of the year. “The company is growing steadily today, developing new technologies projects (AI, ML, etc.), and geographically expanding its presence”. Talent search and staff training were key objectives for 2018. Cinimex closely cooperates with Moscow universities, for example, MIPT; participates in career days and job fairs; develops its divisions in Orenburg and Voronezh. “The bet on the young and ambitious has already justified itself once. We supported the staff in creating the Competence Center for Innovative Technologies, and today we are proud of the projects implemented by Cinimex Data Lab for foreign customers,” said Andrey Sykulev.